THE PROBLEM
​
Anthropogenic land use change and the introduction of invasive species, which are two of the main drivers of biodiversity loss and environmental degradation, can also impact human health through the emergence of infectious diseases. Some of the mechanisms by which invasive species and land-use change are linked to human health are: 1) non-native species, which often become invasive in ecosystems that have been anthropogenically disturbed and that have been depleted of or lack native competitors or predators, can serve as reservoirs of several pathogens that affect humans; 2) invasive species can modify pathogen transmission dynamics if these are introduced with exotic pathogens or if they displace native species that are otherwise less competent hosts; and 3) invasive species are often found in close association to humans, usually as commensals, like peri-domestic rodents, cats and mosquitos, and can thus increase the risk of human exposure to pathogens transmitted or carried by these species. Managing ecosystems to make them less suitable for invasive species, or directly controlling populations of invasive species can have two-fold benefits: reduce risk of pathogen exposure and transmission in humans and reduce threats to biodiversity  and ecosystem function.
Invasive cats and Toxoplasma gondii infection 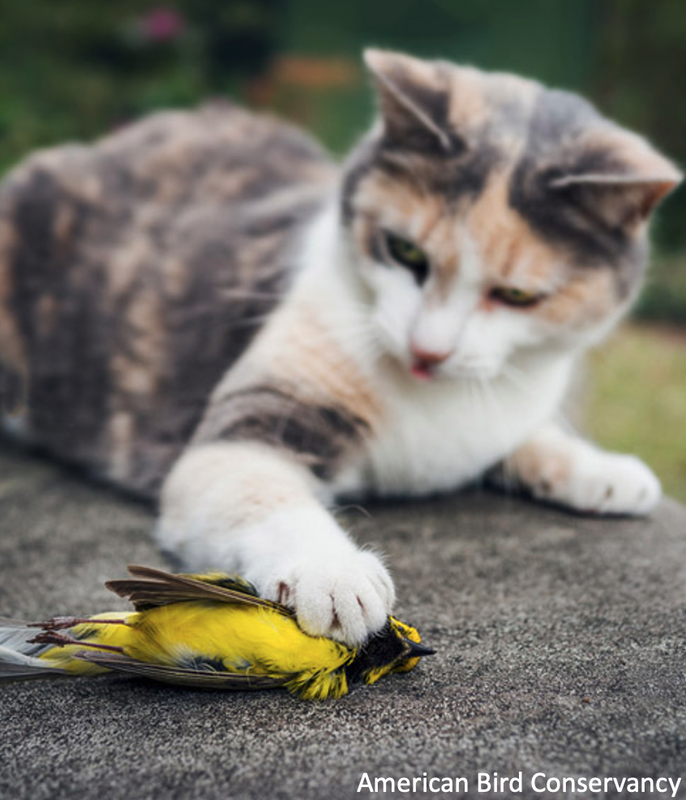 Cats kill 1.3-4 billion birds every year in the US alone

A) Comparison of T. gondii exposure in people from seven Mexican islands. Islands colored red have cats, whereas cats have been eradicated or have always been absent from islands colored blue. B) Risk factors analysis. Having cats near people's homes increased the odds of T. gondii infection.
​​Cats have been introduced to approximately 179,000 islands, and co-occur with people in approximately 560 of them[1,2]. Cats are the second most widespread invasive predator on islands and are responsible at least in part for 14% of all bird, mammal and reptile extinctions on islands[3,4]. Free-roaming cats on the mainland are also opportunistic predators and in many cases are additionally subsidized directly with supplemental food or indirectly with peri-domestic rodents [5,6]. Management schemes for free-roaming populations range from complete elimination of the population (i.e. eradication) to varying degrees of population control (e.g. trap-neuter-release (TNR), trap-neuter-adopt or trap-euthanize). Most countries and many states in the USA have few, if any, regulations concerning cat ownership and cat owner responsibilities, making free-roaming cat population control inconsistent and difficult to enforce [7]. Programs such as TNR adhere more closely to the demands of cat advocates, resulting in negligible benefits to wildlife, high long-term management costs, and usually uncontrolled free-roaming cat colonies [8,9]. In theory, these forms of management can significantly reduce cat population sizes if they cover a large proportion of the population and are done consistently [9]. However, supplementary feeding, pet abandonment, and persistence of fertile females may attract cats from nearby colonies and increase local cat densities [10], eventually making trapping efforts a waste of resources.

Cats and other wild felids are the only known definitive hosts of Toxoplasma gondii, and infected cats can shed up to hundreds of million oocysts in their feces [13]. Infection with T. gondii can cause miscarriage or severe ocular and neurological lesions in newborns, systemic disease in immunocompromised individuals, and has been associated with neurological disorders such as Alzheimer’s and schizophrenia [14–18]. Exposure to T. gondii oocysts (the environmental stage of the parasite) through contact with contaminated soil is one of the most common routes of T. gondii infection [19–22]. Soil-related activities such as gardening or having an occupation involving soil exposure are associated with high risk of T. gondii infection [23]. There is currently no vaccine against T. gondii, and treatment is often limited to reducing the risk of congenital transmission in women who become infected during pregnancy, or severe illness in people with a compromised immune system [24,25]. Following proper food handling and hygiene practices can reduce exposure to T. gondii [26]. However, because free-roaming cats contribute significantly to the environmental load of T. gondii [27], implementing management strategies that effectively control cat populations can be a more effective approach for reducing environmental contamination at its source. Likewise, on the majority of islands that do not harbor native felids, the local environmental source of T. gondii can be eliminated through cat eradications.

​As part of my research, we compared the seroprevalence and risk factors associated with T. gondii exposure in people on seven islands located off the coast of the Baja California Peninsula in Mexico. These islands varied in cat density, including one island in which cats were eradicated in the year 2000 (Natividad), and another island in which cats had never been present (El Pardito). We found that eradication of introduced cats on islands could significantly reduce human risk of exposure to T. gondii. Exposure to T. gondii was completely absent on the island that never had cats and near zero on the island where cats were eradicated. Furthermore, all island resident children born after cats were eradicated showed no evidence of exposure to the parasite. The odds of T. gondii infection were nearly five-fold higher in people that had cats near their homes. On islands with cats, we found no association between local cat density and T. gondii seroprevalence, suggesting that complete eradication rather than control of cat population densities is necessary to reduce public health impacts of T. gondii infection. A link to the full research article can be found here.

Follow this link for for more on T. gondii in islands where cat eradication is feasible. Here for a study on T. gondii oocysts in soil from parks and community gardens in central California. And here for mor information about the ecology, molecular biology, epidemiology and methods for identifying Toxoplasma gondii in soil, food and water. 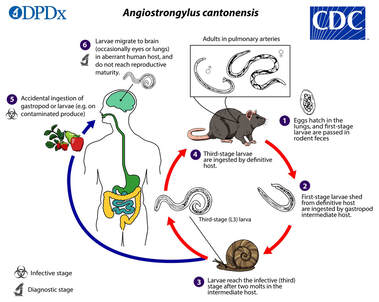 Life cycle of Angiostrongylus cantonensis, the nematode that causes rat lungworm disease or eosinophilic encephalitis in people.
Rat lungworm is an emerging snail-borne zoonotic disease caused by the parasite Angiostrongylus cantonensis that is maintained by snails as intermediate hosts and rats as definitive hosts [28]. Rat lungworm was first reported in rats from China in 1935 and has since been reported in humans from several countries of Asia, Oceania, Africa, the Americas and the Pacific and Caribbean islands [29–34]. African giant snails (Achatina fulica), golden apple snails (Pomacea maculata) and terrestrial semi-slugs (Parmarion martensi) are have been introduced widely outside their native ranges for aquaculture, food consumption or as pets, but given their high reproductive capacity, these species are now agricultural pests and important drivers of native snail declines, and forest and wetland degradation [35–39]. These snail species tend to be more frequently infected and carry high rat lugworm loads [40,41]. Moreover, rats of the genus Rattus, which are the most common definitive hosts for A. cantonensis, are one of the most widespread invasive species that are also commensals of humans [42,43]. This group of species has mostly dispersed through ships and commercial shipments, and are thus more abundant in coastal areas [44–46]. Specifically, rats are highly successful island invaders given that the majority of islands naturally lack native rat predators or competitors [47,48].

Rat lungworm risk of exposure at local scales may be influenced by factors affecting snail and rat ecology. For example, the fact that the life cycle of A. cantonensis is largely maintained by invasive species (invasive snails and rats) suggests that environmental degradation may play an important role in human risk of exposure to rat lungworm [49]. Namely, anthropogenically degraded ecosystems may be more favorable for these host species because they provide nutrient subsidies (e.g. from agricultural runoff or human waste) [50,51] and their generalist nature may allow them to outcompete native species that are likely less competent hosts [52,53]. Likewise, environmental degradation resulting from deforestation and changes in land use is often associated with human activities (e.g. agriculture) or human habitation (e.g. rural or suburban expansion), which may increase the probability of exposure to infected snails [54].

As part of my current research at the Gund Institute for Environment, I am examining the factors that drive the introduction of rat lungworm into new regions as well as the role of environmental degradation on rat lungworm risk of infection in humans. Stay tuned for more updates!